We are a third-generation family business, founded in Sherbrooke in 1968. DE LA FONTAINE designs and manufactures steel doors and steel frames.

In commercial settings, our doors and frames can be found in such diverse locations, the Pentagon (USA), the Boston Museum of Fine Arts (USA), the Colorado state University stadium as well as countless schools, residences, and industrial facilities around the world.

Through our growth projects, we are entirely dedicated to maintaining our close relationship with our employees, customers and colleagues. DE LA FONTAINE represents all the advantages and technologies inherent in a local specialized company, on a global scale. A large-scale presence with family approach is our framework for success!

DE LA FONTAINE AT A GLANCE

A family history… of innovation

1968
Incorporation of DE LA FONTAINE in Sherbrooke by Gérald de La Fontaine. A visionary, he is the first in the Eastern Townships market to offer interior doors with pre-assembled frames to facilitate installation.

1973
The company moves to its current location on Brodeur Street, occupying 12,000 square feet. The additionnal space is needed for the manufacturing of new products: frames in 18, 20 and 22 gauge steel for the apartment block market.

1976
DE LA FONTAINE expands in Quebec thanks to several partnerships; the most significant among them is the new site in Chambly.

1986
The company expands its operations in the US: René Bouchard, previously responsible for sales, leaves Sherbrooke for Hartford, CT. He opens the first US warehouse and develops the commercial construction market with heavier-duty steel frames.

1993
Steel is adopted for all door and frame production. Operations for wood trim, molding and interior door production and distribution are transferred to the Chambly factory.

1995
Increased development in the US market is driven by a partnership with Paul Smoot, supported by René Bouchard, who has now joined Smoot Associates.

1998
The “Toyota” management model and added-value production principles are adopted. The factory is restructured to improve efficiencies and reduce delivery time.

1999
The company is well established in the US Northeast. France, Richard and Anie de La Fontaine have all joined their brother Robert in investing in the family business. Robert expands the facility and reorganizes the offices and employee service area.

2002
A difficult period forces the closure of the factory in Chambly, Qc.

2005
Installation of a punching machine and laser, which lead to increase flexibility, reorganization of manufacturing methods and the ability to offer new products.

2009
Market launch of a line of prefinished products with flexible designs that combine performance and esthetics while maintaining fire-resistance standards.

2010
Transformation of the Woburn, MA warehouse into a flexible factory. DE LA FONTAINE reaffirms its support to New England based distributors with an ultra-fast 24-48 hour delivery timeframe.

2013
Major investments in machinery and information technology, as well as the renovation and expansion of the Sherbrooke facility in order to support current and future growth at DE LA FONTAINE.

2021
Installation of a fifth facility in Indianapolis, IN USA

2022
Installation of a sixth facility in Concord, NC USA

« Our purpose goes beyond what we sell. We’re using our business model to become the Americas’ leading quick-service manufacturer of steel doors and frames. » 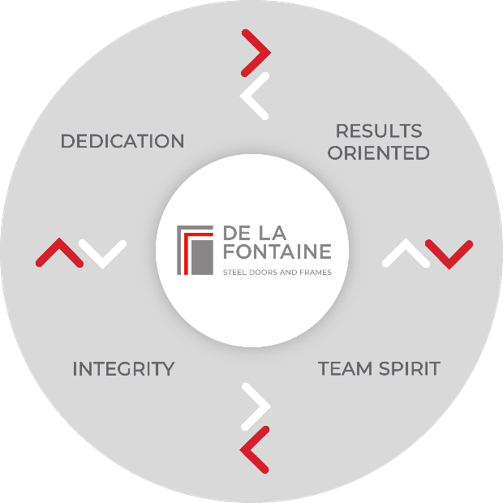 Results-oriented
Regardless of the project scope, our team is entirely dedicated to delivering innovative and quality results. We adapt to find the proper solutions that will allow us to meet and even exceed expectations.
Team spirit
The driving force behind our story and our success, our team spirit brings together dynamic, motivated, responsible and dedicated people. Together we move in the same direction and maximize our strengths every day.
Integrity
We believe that a safe, trusting working environment helps improve productivity, promotes achievement and is an essential pillar of our success. Each employee is a bearer of integrity and is oriented towards professional practices guided by respect, inclusion, trust and honesty.
Dedication
We think like a customer and we act like an owner. Both within our team and towards our customers and suppliers, we are mobilized to keep our promises and involved in obtaining the full satisfaction of everyone.

The DE LA FONTAINE team is made up of qualified employees and experienced leaders whose technical and managerial skills are perfectly balanced. A management system worthy of a large corporation optimizes our human capital to achieve the twin objectives of flexibility and quality.

With a degree in finance from the Université de Sherbrooke, Robert de La Fontaine occupied several key roles within the family business before succeeding his father as President in 1982. Both a visionary and a leader, he has implemented several modern management practices, such as lean manufacturing. While overseeing the day-to-day management of the business and its strategic direction, he remains closely involved with our clients and our products’ markets.

With an academic background that combines mechanical engineering and business administration, Gabriel de La Fontaine is an expert in productivity, operational efficiency and cost control. Since his appointment to his role in 2012, he has supervised and managed all departments of the company with one goal in mind: total quality. His analytical skills and decisive attitude are powerful assets in the management of the company’s operations.

With a Bachelor of Business Administration degree, Stephan Richer has over 25 years of experience in product management, manufacturing planning and logistics management, from his time with leading-edge companies including Bombardier (recreational products) and Héroux-Devtek (landing gear). A strategic and multi-talented leader, he manages business development, market delivery and brand marketing for DE LA FONTAINE in Canada and around the world.

Director of Engineering and Supply Chain

Guillaume is an engineer and a technical product specialist who oversees the order entry and engineering, and supports current and future facilities. He is involved with product development, optimization and standardization of the manufacturing process and acts as a technical support resource for distributors and design professionals.

Responsible for a team of over 100 employees in production, supervision and maintenance, Steve has close to 20 years of experience in the manufacturing industry, specifically in the sheet metal processing sector. Customer focus is his primary objective, and he continually seeks to optimize the production line in order to ensure production, on-time delivery and product quality.

Holder of a master’s degree in Business Administration from the University of Sherbrooke, as well as CPA and CGA professional accounting designations, Anick has a fifteen years experience in finance and accounting. In charge of finance and accounting at DE LA FONTAINE, she is responsible of establishing the financial strategy and collaborate in the activity planning allowing to support and enable the efficient growth of the company.